Talking the Tropics With Mike: Focus shifts east from the Gulf of Mexico

WATCH “Preparing for the Storm”

REMEMBER WHEN A TROPICAL STORM OR HURRICANE IS APPROACHING: Taping windows is *NOT* helpful & will not keep glass from breaking... & realize the cone is the average forecast error over a given time - out to 5 days - & *does not* indicate the width of the storm &/or damage therefore do not become fixated on the center of a tropical system.

The peak of the hurricane season was Sept. 10th with a mini peak in mid Oct.: 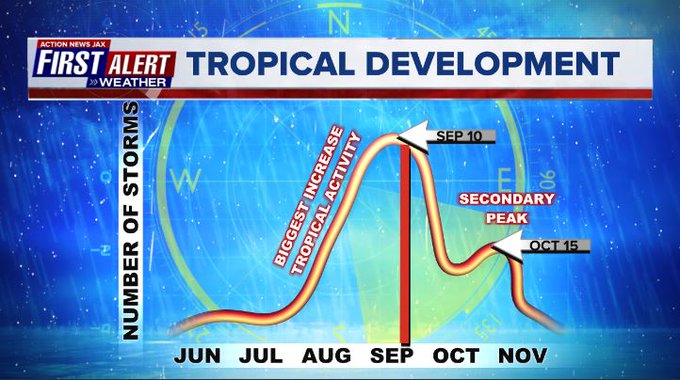 (2) possible tropical development over the SW or W Atlantic over the next few days.(2) tropical waves headed west off the coast of Africa

(3) possible tropical development over the SW or W Atlantic over the next few days.

(1) A tropical wave near & over Central America & the Yucatan Peninsula moved over the SW Gulf of Mexico Sun. morning & was upgraded to “Nicholas” becoming a hurricane late Mon. evening upon approach to the Central Texas Gulf Coast followed by quickly by a landfall at 1:30 AM EDT on the eastern part of the Matagorda Peninsula, about 10 miles (15 km) west-southwest of Sargent Beach, Texas, & the last NHC advisory was issued late Tue. evening. Shear has remained moderate to strong but was also roughly aligned with the forward movement of Nicholas, so the storm still managed to gradually intensify with many bursts of intense convection with most of the very heavy rain & strongest winds east & northeast of the center. After the landfall on the Central Southeast coast of Texas west/southwest of Galveston, Nicholas slowed dumping very heavy rain over far SE Texas eastward through much of Louisiana. Severe flooding is a concern along & to the east of the storm’s track all the way to the Central & Western Fl. Panhandle, but the extreme rainfall stayed a little south & east of most of metropolitan Houston.

The surface low will continue to slowly wind down while meandering over Louisiana before dissipating by late week.

There will be no direct impacts on Jacksonville/NE Fl./SE Ga.

(2) Forecast models continue to indicate a tropical disturbance developing over or near the Western or SW Atlantic over the next couple days. This disturbance is a product of an old tropical wave that moved off Africa days ago combined with an upper low. Forecast models have generally trended north on this disturbance to the east of the Carolina’s (vs. just east of Fl.) though the low may start to consolidate east of Fl. but 200+ miles away from the coast while moving N/NW. The Outer Banks of N. Carolina could still be grazed by this system Thu. into Fri. though the general trend has been more east during the past few days. Once the disturbance gets caught up in the southwesterly flow & begins to accelerate to the northeast, there may be some deepening but by then the system is moving away from the U.S. & headed for the N. Atlantic.

(3) Multiple tropical waves are marching west off the coast of Africa as one would expect near the peak of the season. A wave that moved off the coast of Africa Mon. night will move west this week with potential to become a tropical storm. Pockets of strong shear + some dry air will probably play a role in the long range intensity. Another strong wave with the potential for some development will move west off of Africa by late in the week. Positioning & strength of the Bermuda High will be critical on where these waves travel & how far west they manage to make it. But it would be a good idea to stay up to date on the latest forecasts next week in the Caribbean & the Bahamas.

Sea surface temps. across the Atlantic are now near to above avg. across much of the basin (2nd image below) & - even more importantly - deep oceanic heat content (which helped “feed” Ida) is impressive & the “equivalent oceanic heat content” - namely depth averaged temperature in the upper 300 m (~984 feet) - is even more impressive all the way from Africa to the Gulf of Mexico. Such an ocean water temp. pattern is conducive to long track deep tropical Atlantic tropical cyclones & can lead to a more favored regime for rapid intensification cycles. From an AMS research paper in ‘08 Mainelli, DeMaria, Shay, Goni: “Results show that for a large sample of Atlantic storms, the OHC variations have a small but positive impact on the intensity forecasts. However, for intense storms, the effect of the OHC is much more significant, suggestive of its importance on rapid intensification. The OHC input improved the average intensity errors of the SHIPS forecasts by up to 5% for all cases from the category 5 storms, and up to 20% for individual storms, with the maximum improvement for the 72–96-h forecasts. The statistical results obtained indicate that the OHC only becomes important when it has values much larger than that required to support a tropical cyclone.” More recent research continues to indicate similar correlations.

Saharan dust. Dry air - yellow/orange/red/pink. Widespread dust is indicative of dry air that can impede the development of tropical cyclones. However, sometimes “wanna’ be” waves will just wait until they get to the other side of the plume then try to develop if everything else happens to be favorable. In my personal opinion, way too much is made about the presence of Saharan dust & how it relates to tropical cyclones.

Deep oceanic heat content continues to increase across the Gulf, Caribbean & deep tropical Atlantic & has become pretty impressive from the Central/NW Caribbean into the Gulf of Mexico:

Surface analysis of the Gulf:

Back to School: Everything you need to know

Everything you love about wape.com and more! Tap on any of the buttons below to download our app.

Enable our Skill today to listen live at home on your Alexa Devices!

You may be offline. Please check your connection and try again using the Retry button.